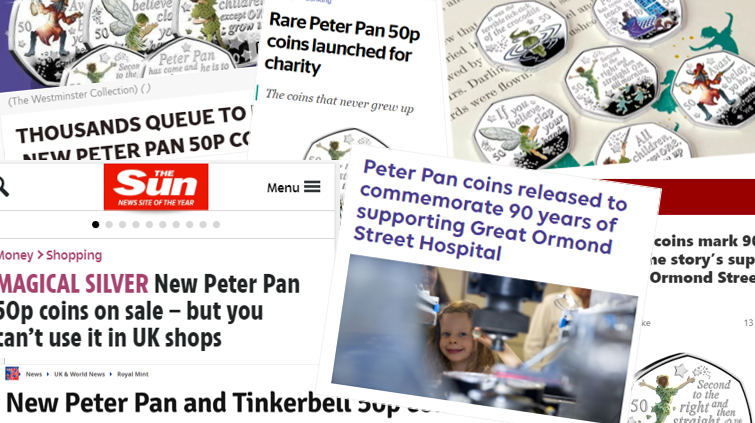 On Tuesday 11th June, we launched a brand new range of Peter Pan 50p coins to celebrate the 90th anniversary of J.M. Barrie gifting his rights in the Peter Pan story to Great Ormond Street Hospital.

The coins have proven extremely popular with collectors and in the first week alone they have raised over an incredible £150,000 for Great Ormond Street Hospital Children’s Charity.  We’re delighted to see this project come to fruition and to be able to support this fantastic charity – where everyday more than 600 children arrive for life-changing treatment.

Not only that, but the Peter Pan 50p coins have also hit the headlines and to date they’ve been featured in the news over 25 times! Never before have we seen so much press coverage for a new coin release. Take a look at some of the headlines below…

“When was the Peter Pan 50p coin collection launched and where can you buy it?”

Want to join the discussion?
Feel free to contribute!

This site uses Akismet to reduce spam. Learn how your comment data is processed.

How to nail the 288 Group sales interview