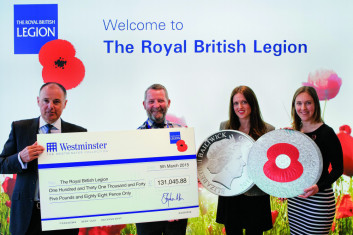 As the distributor of the annual Poppy Coin, The Westminster Collection is proud to continue supporting The Royal British Legion each year.

The coins, which have often included colour or gold-plated elements, are some of the most innovative pieces struck for collectors over the last 6 years.

Yet owning a Poppy Coin means much more than simply collecting the latest interesting or historic commemorative coin.

Each coin owned by you has resulted in a donation to the work of The Royal British Legion providing financial, social and emotional support to all who have served and are currently serving in the British Armed Forces and their families.

Louise Ajdukiewicz, Head of Corporate Partnerships at The Royal British Legion, says “These funds make a real difference to the charity and help us to continue our vital services supporting the whole Armed Forces community.”

Discover more about how the donations from the Poppy Coin helps The Royal British Legion support the Armed Services community.

But does owning a Poppy Coin provide an alternative to wearing a Poppy or donating directly to The Royal British Legion?  Of course not.

I’ll be making my annual donation to The Royal British Legion and wearing my Poppy with pride this year.  But I have also bought a silver Poppy Coin for each of my children in the knowledge that they will have a valuable reminder of the sacrifices of the First World War.

Some examples of how The Royal British Legion supports the Armed Services community:

Care Homes – The Legion has six care homes to provide short and long term care for serving and ex-Service people and their dependants. Situated around the country, they offer a wide range of services including four with specialist dementia care. Care home communities include men and women of varied ages and abilities, and because these homes are exclusive to ex-Service people and their dependants, there is a unique camaraderie.

Break Centres – they offer much-needed breaks to ex-Service and serving personnel and their families, who may be recovering from an illness, bereavement or other life-affecting event. The Legion have four Break Centres located in prime locations around the country.

Handy Van Service – they provide essential and critical support to ex-service people who are unable to carry out household repairs or small jobs, helping them to remain independent in their own homes. The team of trusted handy people are also fully trained caseworkers enabling them to look out for other issues and people at risk in order to flag to the wider welfare team.

Civvy Street – This service provides a range of information and advice on resettlement, learning and work. Civvy Street is designed to assist in-Service families, armed forces leavers and the veterans’ community adjust to civilian life and kick-start a new career.

Scroll to top
This site uses cookies: Find out more.